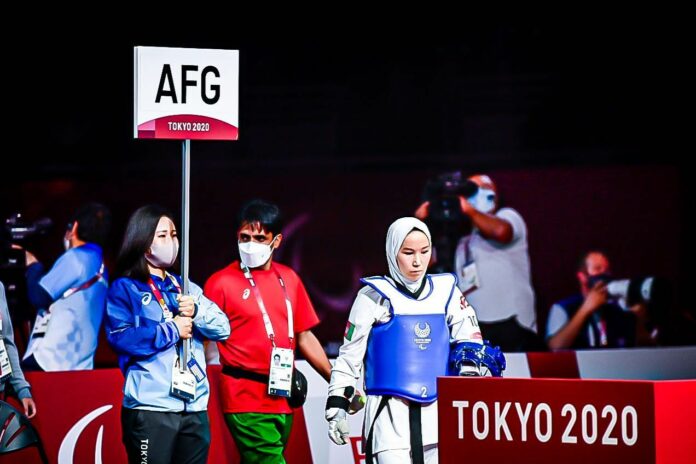 Following the grant of a protection visa (refugee visa) for the female Afghanistan Para athlete Zakia Khudadadi by the Australian Government, which saw her being evacuated from Kabul airport to Tokyo to be able to compete at the Tokyo Para Games, the focus then centred on the female national team in Afghanistan who were left behind when the Kabul airport was finally closed, and all foreign troops departed.

Eight female athletes who are part of the national team went into hiding following the closure of Kabul airport and the subsequent control of the airport by Taliban soldiers. This was after some 77 Afgan athletes, officials and their family members were granted Humanitarian visas and were flown out of Kabul to Australia before the airport closed.

There were reports that the Taliban were beginning to target female athletes and going door to door looking for them. Consequently, urgent action was required to try and protect the female Taekwondo athletes even though the airport was now closed.

As a result of the intervention of the Australian Taekwondo and Oceania Taekwondo, approaches were made to the Australian Government to intervene to grant them protection visas.

John Kotsifas the President of Oceania Taekwondo and the Humanitarian lawyer who lodged the visa applications for all the athletes stated:

“This was a detailed and coordinated effort between our Australian MNA, the Australian Government and Oceania Taekwondo. Australian Taekwondo was instrumental in the evacuation process, in particular Ms. Heather Garriock the CEO of Australian Taekwondo and Mr. Craig Foster who is a human rights activist and has been closely working with Amnesty International.”

According to John Kotsifas, the rescue and evacuation of the athletes required a careful and detailed strategy because the athletes were on their own, very young, had no money, the airport was closed, and they remained exposed to capture by the Taliban.The youngest of the athletes was just 16 yrs old.

“Despite the fact that we managed to secure refugee visas for the eight young women, we still needed to coordinate their evacuation from Afghanistan given that Kabul airport was closed. The only option for the athletes was to make their way to the Pakistan border which was a very long and dangerous journey particularly given that the Taliban were now in control of the country and Taliban soldiers were everywhere.”

“These eight women were very brave and despite the obvious dangers they faced if they were caught, they slowly made their way towards the border with great determination and amazing resilience. Heather Garriock kept in constant contact with the athletes by mobile 24/7 whilst I tried to negotiate with the Pakistan High Commission to ensure their passage through the border. There were constant hurdles and when they finally got to the border, they were not permitted to cross the border into Pakistan.”

“We then advised the athletes to go into hiding for a few more days until we could get the documentation needed for them to be allowed into Pakistan. Time was fast running out, and the athletes remained in grave danger of being captured by the Taliban. We finally managed to get the border crossing permits only to be told that the athletes needed to travel another 20 hours away to a different border in order to be permitted entry into Pakistan. This would prove very dangerous to the athletes and their lives could be placed in jeopardy if they had to travel so far and to cross checkpoints that by now were being controlled by the Taliban.”

The Pakistan border control authorities also indicated that one of the athletes who did not have a passport would not be permitted entry. Further, there were two border controls between Afghanistan and Pakistan. The athletes had made their way to the Chaman border but when they go there, they were told they need to travel to the Torkham border which was another 20 hours travel.

“There was no way the athletes were going to make it to the Torkham border without being caught by the Taliban. There was on hurdle after another in trying to get these women into Pakistan before they were caught but following further approaches which I made to the Pakistan consulate in Islamabad, all the athletes were finally permitted to enter Pakistan at the Chaman border control where they were hiding without the need to travel to another border which was hundreds of miles away.”.

The athletes are now safe in Pakistan and are being looked after by Pakistani and Australian authorities until they make their way to Islamabad for onward departure to Australia.

According to John Kotsifas, “There is still much work to be done before the Taekwondo athletes can fly to Australia and they will probably spend the next few weeks in Islamabad whilst Australian bound flights are being organized, but right now they are all safe and well very much looking forward to starting their new lives in Australia.”