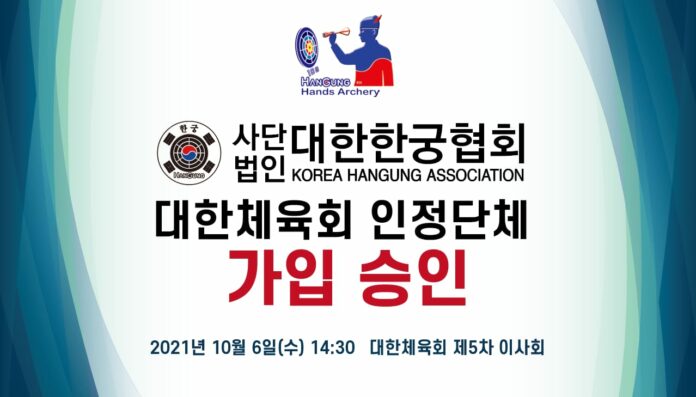 The KSOC’s recognition came in 12 years after the establishment of the Korea Hangung Association (KHA) in 2009, which has served as a Korea-originated sport for all, especially for the elderly, the disabled, children and women.

Hangung, or hands archery, was invented by Korean Hu Kwang in 2006. Hangung is a sport for all, which combined the western dart game with traditional Korean archery and ‘Tuho,’ or throwing sticks from a set distance into a canister, plus an electronic score board. Hangung is a recording sport that throws Hangung pins five times with the left hand and the right hand, respectively and determined a player with a higher mark as the winner.

The KHA applied for the KSOC’s approval as a recognized sport organization in November 2020 as it met the requirements by admitting to four of the 17 city and provincial sport associations of Sejong, Ulsan, South Chungcheong Province and South Gyeongsang Province. The KHA targets to expand its admittance to more than 10 by next year.

The KHA has about 14,000 Hangung judges and referees, and has conducted about 400 Hangung competitions a year. The KHA plans to expand the Hangung population at home an abroad through its Hangung Family HELPs (Health, Engrossment, Leadership, Personality) Program. The KHA estimates that about 1 million people enjoy Hangung.

As part of its efforts to globalize Hangung, the World Hangung Association, also led by Hu Kwang, signed a memorandum of understanding with GCS International, headed by Dr. Chungwon Choue, who also serves as president of World Taekwondo, on December 4, 2020.

GCS International, a Seoul-based, U.N.-affiliated NGO with a global membership of about 90, was established in 1979 by GCS movement founder Dr. Young Seek Choue, who played a crucial role in establishing the U.N. International Day of Peace in 1981.

“I wish to appreciate the KSOC for approving our Hangung association as a recognized sport body. Through Hangung, we will enhance the national image of Korea and will do our best to promote the Hangung Family-HELPs Movement worldwide,” said Hu Kwang. “I also will do my utmost to further contribute to the promotion of the people’s health, family happiness and world peace through the Korea-originated sport for all, Hangung.”