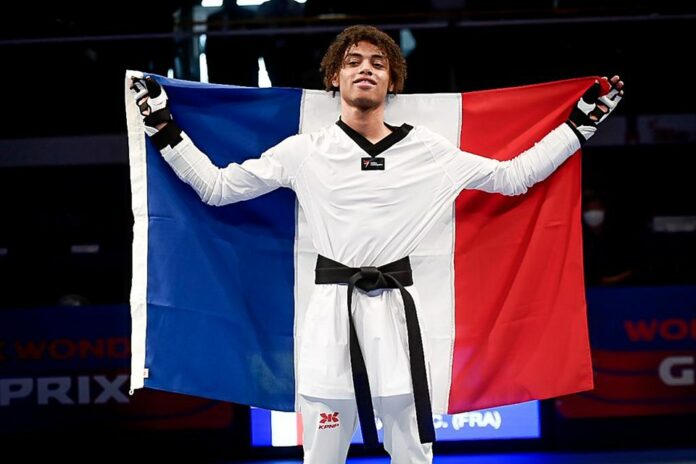 The world’s best athletes put on a show for the Grand Prix’s Paris debut, giving the city of Paris a taste of the spectacular taekwondo action that is to come at the Olympic Games Paris 2024. The Grand Prix in Paris continues the best of three rounds format which was introduced at the Roma 2022 Grand Prix. 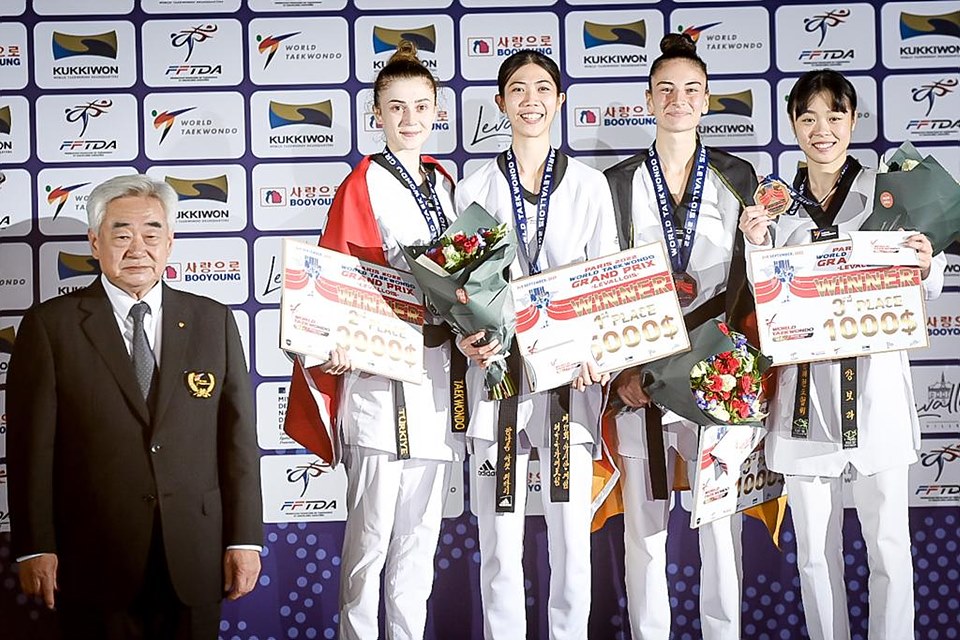 In the women’s -49kg, Tokyo 2020 Olympic champion Panipak Wongpattanakit of Thailand met Turkey’s Merve Dincel in the final. It was a calm and measured performance from Wongpattanakit who demonstrated her experience, registering the first points with a kick to the body protector. A head kick by Wongpattanakit, followed by Dincel being forced into a Gam-jeon would wrap up round one in Wongpattanaki’s favour. Round two saw blows traded before Wongpattanakit secured gold with a head kick to win 10-6.

In the earlier semi-finals, Wongpattanakit had won an impressive victory against Korea’s Bora Kang. After losing the first round, the Thai athlete fought back to take rounds two and three, and secure her spot in the final. Merve Dincel had overcome Germany’s Ela Aydin in a fierce contest. Round one was a close contest, with blows traded until Dincel broke the deadlock in the last three seconds to win 7-3. Aydin fought back to take round two before Dincel stepped things up to take the third round 7-4. 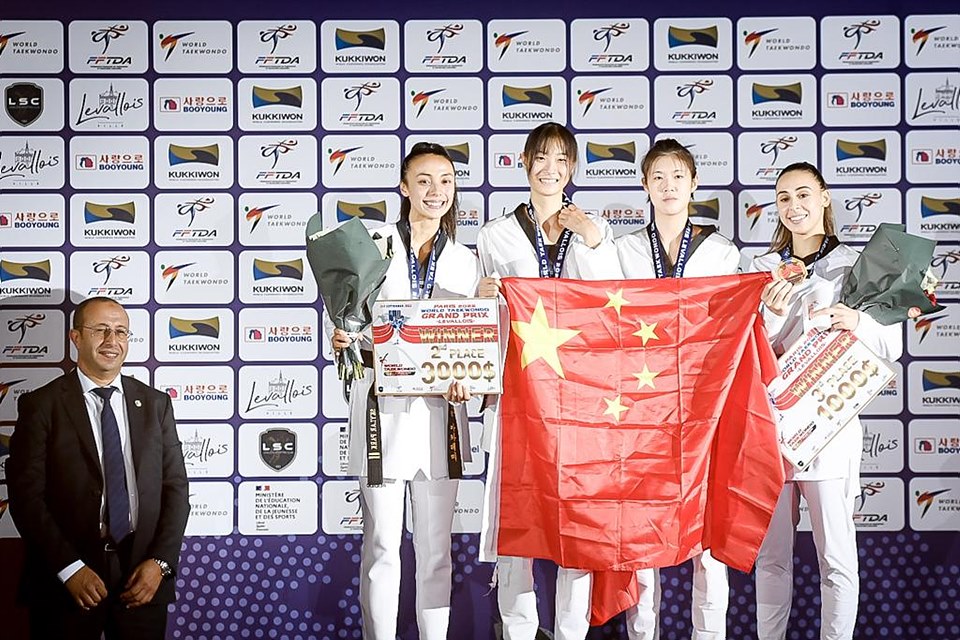 The women’s -57kg brought together Skylar Park of Canada and China’s Zongshi Luo. Luo was coming off the back of an impressive gold medal performance at the Roma 2022 Grand Prix. The first round was closely contested, with a Gam-jeon eventually breaking the deadlock to see Luo go 1-0 up. Luo and Park then traded head and body kicks, respectively, and Luo closed out round one 4-2.

Park took the lead in the second round, landing a body kick to go up by 2. The two would continue to trade kicks throughout the round, with a head kick by Luo to go up 6-4 proving to be the decisive one. A Gam-jeon in the final seconds saw the final finished at 7-4 with Luo claiming her second Grand-Prix medal in a row and Park taking home her first-ever Grand Prix silver.

Luo Zongshi had overcome Morroco’s Nada Laaraj in the semi-finals. The Morrocan had led 4-0 in round one before losing 6-4 after a flurry of points from Luo Zongshi. She would lock her place in the final after taking the second round with a smart, controlled performance.

In the second semi-final, Canada’s Skylar Park was looking to go a step further than her semi-final loss during the Roma 2022 Grand Prix. She would do so in style, winning rounds one and two to knock China’s Lijun Zhou out of the competition. 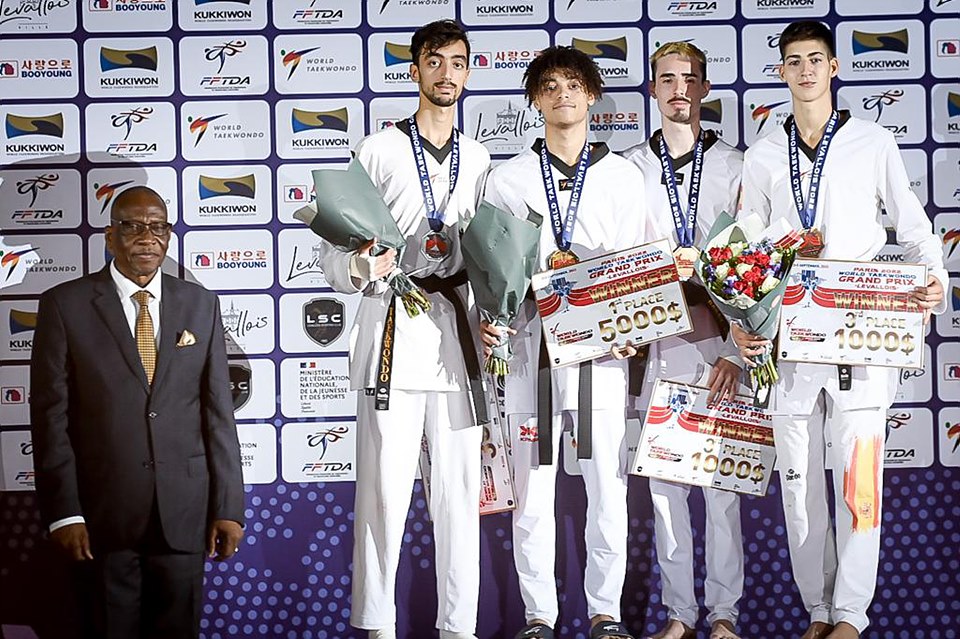 The final match was a fitting end to the day with home-town favourite, Cyrian Ravet of France in his first-ever Grand Prix final against Tunisia’s Olympic silver medallist Mohamed Khalil Jendoubi.

It was a patient start by both athletes, with the first point on the board not coming until half way through round one when Jendoubi was forced into a series of Gam-jeons. Ravet would hold a 2-0 lead until the end of the round when he was forced into a Gam-jeon. However, with just seconds left on the clock, he would hold on to take round one.

Into round two, and it was clear Jendoubi was not going to give up the final easily. Two punches later and Jendoubi went up 0-2. The Tunisian would remain in the lead until the final ten seconds of the match with a video replay confirming Ravet’s head kick for three points. With just seconds left on the board, Ravet was forced into a Gam-jeon to bring the score level at 3-3, before Jendoubi was also forced into a Gam-jeon to hand the lead and the gold to Ravet. 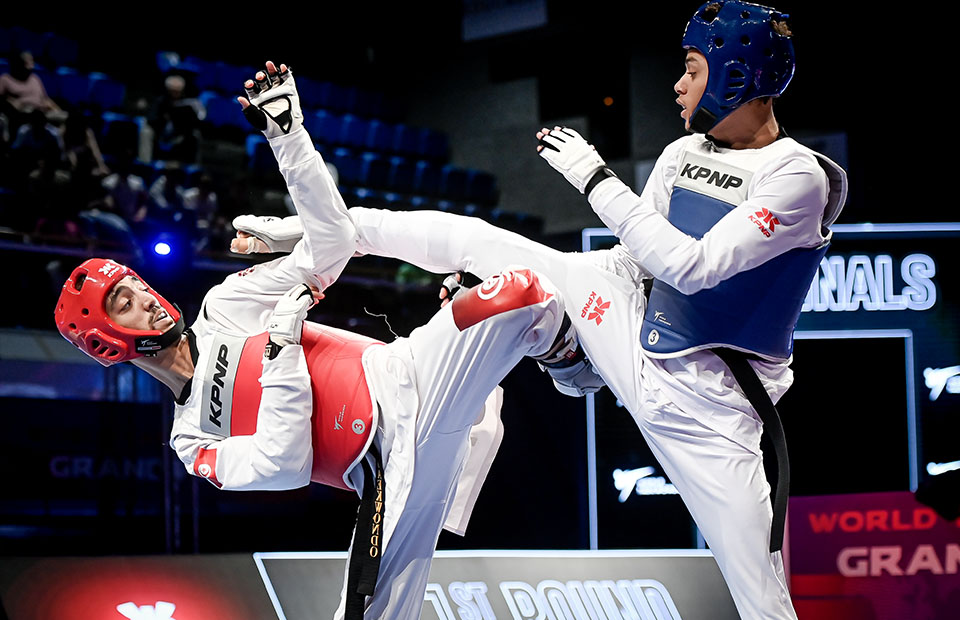 In the semi-finals, Cyrian Ravet had come back from a 9-2 deficit against Spain’s Adrian Vicenta Yunta to take the first round 10-10, causing roars from the crowd. In a ferocious competition, Vincenta Yunta levelled the score after taking the second round. However, it would be Ravet who would claim victory, hanging on in a closely-fought third round where two Gam-jeons by Vincenta Yunta were the difference.

In the second semi-final, Mohamed Khalil Jendoubi of Tunisia had faced Australia’s Bailey Lewis, coming through with a convincing two-round win, despite Bailey’s valient performance.