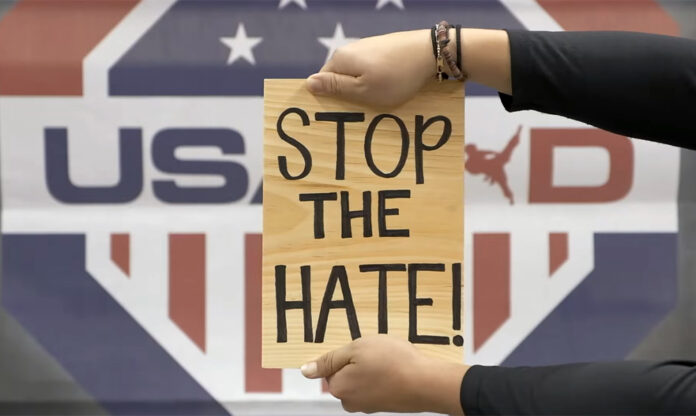 We talked in exclusive with USA Taekwondo CEO, Mr. Steve McNally, who told us about the goal of this campaign.

“It’s really important to realize that athlete abuse isn’t just physical – emotional and psychological abuse are hugely damaging too, particularly to vulnerable young athletes, and our Stop the Hate campaign is aimed at those who talk tough from behind a keyboard and think it’s okay to share extreme and almost always false claims online to try and further their own agendas”.

“As a Taekwondo community, if we say enough is enough and don’t tolerate their offensive behavior, we can create the safe and successful environment for athletes that we should all be striving for, giving abusers no safe havens, and driving those who seek to do harm out of our sport once and for all”. Stated Mr. McNally.

By sharing the video, you can let the athletes who suffer any kind of bullying, that they are not alone.

“USATKD proudly stands between all athletes and their would be abusers, and says enough is enough. We believe that all decent people in the United States, across the Pan American region and around the world will join us in creating a safe place to play for all athletes by insisting that’s it’s time to stop the hate”. Concluded USATKD CEO.