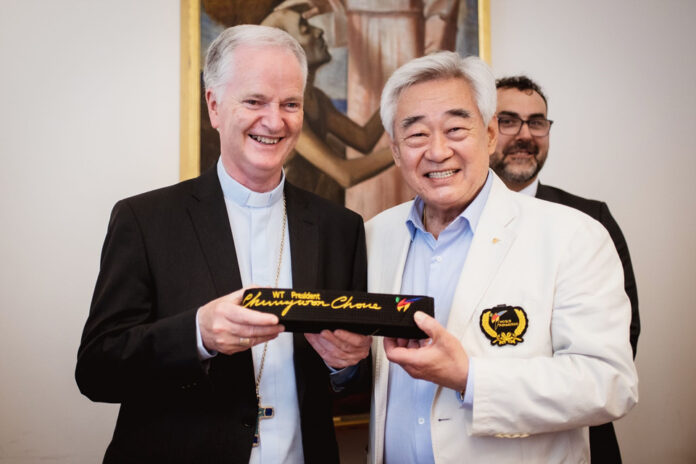 Vatican Taekwondo was recognised as an official Member National Association of World Taekwondo in November 2021 and has had a strong connection with the sport in recent years. The Federazione Italiana Taekwondo (FITA) partnered with the Saint Pius X Institute of Vatican City to organize a Taekwondo course for the students of the seminary. The course sees boys aged between 13 and 17 years old practice Taekwondo three times a week as part of their curriculum.

“We must celebrate the desire to compete which brings out the best in athletes. We must recognise that at times it is a particularly intense rivalry or competition between two or more contenders which spurs them to achieve more. But we should never lose sight of the integrity of the athlete whose primary challenge is to achieve his or her own potential and who will value more the intrinsic satisfaction of competing well than the extrinsic awards of success and victory. I am not interested in competing with anyone, I hope we all make it.

“I am grateful that the Vatican is a member of the World Taekwondo and I am delighted to see these students who training in Taekwondo in the seminary. As the Secretary said, Taekwondo is about more than winning; it is about challenging yourself to be the best you can be and treating others with understanding and respect. As we always say: Peace is more Precious than Triumph.”

The World Taekwondo Demonstration Team first performed at the Vatican during “Sport at the Service of Humanity” the 1st Global Conference on Faith & Sport in 2016.

The following year in 2018, the World Taekwondo Demonstration Team performed a historic demonstration in St. Peter’s Square, Vatican City in the presence of Pope Francis. In attendance at this visit was Sister Linda Sim who this year won gold in the Recognized Individual Female Over 65 category at the Goyang 2022 World Taekwondo Poomsae Championships.