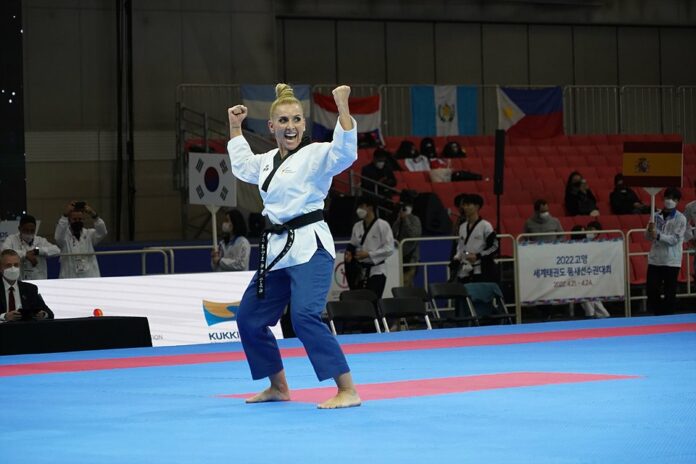 At the end of the day, host country Korea was leading the medal tables with 11 golds, followed by Chinese Taipei with three, and Spain and USA with two each.

Multiple categories were in play – recognized and freestyle, male and female, individuals and teams, mixed and pairs.

With the creative categories offering musical accompaniment, the sound system got a workout as the huge venue echoed to the sound of rock, orchestral and electronic arrangements. And the crowd was particularly vocal, letting rip with chants and songs as favored athletes strutted their stuff on the mats.

The biggest applause of the day went to refugee athlete Gasto Nsazimukiza, originally from D.R. Congo, but currently resident in Kenya. Not only did he win the hearts of the crowd when he performed in a special showcase event, he was mobbed for photos afterward by spectators and staff of the UNHCR. (Note: The story of Nsazimukiza’s extraordinary struggle against tragedy and adversity will be covered in this space tomorrow.)

One of the highest profile teams at the tourney were unable to medal. However, Team Ukraine’s participation alone inspired the World Taekwondo family, who are united in their support for the country at this difficult time. However, one team member, in the Cadet Individual Male category, will have another chance on Day 3.