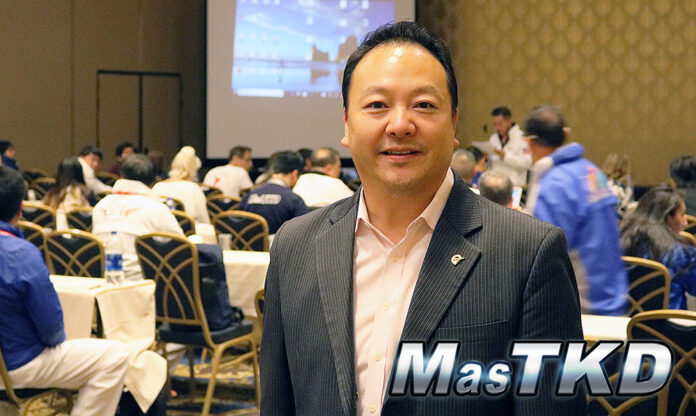 Much has been said about the disadvantage that Pan America has compared to Europe or Asia with respect to its circuit of competitions, since in the Pan-American region the number of G-ranked events is lower than the continental unions mentioned before.

We spoke with the Secretary General of the WTPA, Rick Shin, an important businessman, and great organizer of Taekwondo events on the West Coast of the United States and he was forceful in assuring that three and even four circuits for tours could be organized in Pan America.

“If we put together four events in South America with one-week separation between each one of them, the teams could move from one country to another in the same geographical area and in this way many athletes who do not have the possibility of traveling to the United States, Canada or Europe, could accumulate up to 40 points moving, for example in Brazil, Argentina, Chile and Uruguay”, Shin expressed very analytical.

The same statement made by the Secretary General of the WTPA was transferred to the Caribbean, where there are many MNAs with serious intentions and plenty of antecedents to organize several coordinated events, which would be aligned on dates and objectives with the Central American circuit and of course another one for North America.

“I know that there is an intention in many countries to organize G ranked events and if we add to this that they can be coordinated with neighboring countries, they would be assuring a large number of registrations, since many of the participants would take advantage of it and move from one event to another”, continued the Secretary General.

“The great advantage that Europe has is precisely that, that there are a large number of events perfectly coordinated among its organizers, which results in that at the end of the participation in one, they get on a train and leave to the next one. Many say that the distances in Europe are less than in America and I know it, that’s why my idea is to make four Europes within our great Pan America”, Rick Shin concluded.

Last chance for Europeans to qualify for Tokyo 2021 Olympics