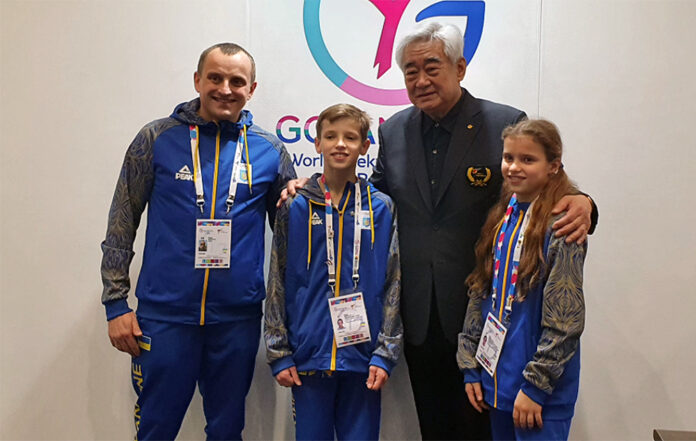 Kim, president of the Busan Taekwondo Association, attended the Goyang poomsae championships in his capacity as the head of the Korean national team. Korea took the overall title for the 12th consecutive time.

The handover ceremony took place during the welcome dinner for the 2022 Goyang World Taekwondo Poomsae Championships in KINTEX, Goyang, Gyeonggi Province on April 20, 2022.

KINTEX served as the venue for the 2022 Goyang World Taekwondo Poomsae Championships, which drew a total of 973 athletes and officials from a record 63 countries.

With the financial support from the organizing committee, two Ukraine athletes – Davyd Gavrylov (13) and Yeva Gavrylov (12) – and their father and coach Ruslan Gavryov participated in the four-day poomsae championships.

Female athlete Yeva took the athletes’ oath during the opening ceremony of the championships and the Ukraine team took home the active participation award.

WT President Choue welcomed the Ukraine team during and after the championships.