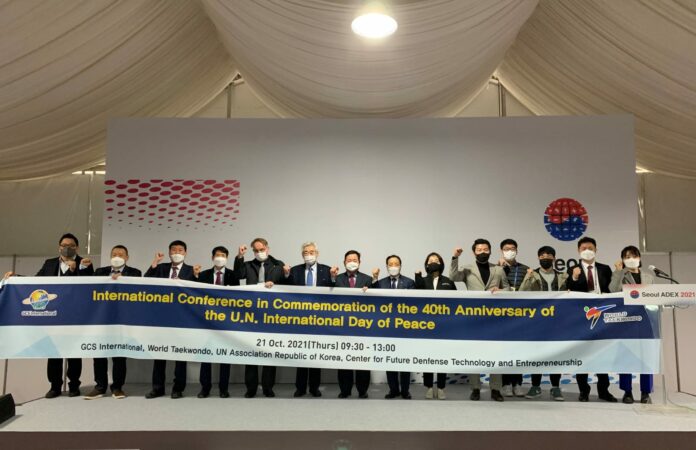 The seminar was jointly promoted by GCS International and World Taekwondo and organized by the U.N. Association of the Republic of Korea, and the Center for Future Defense Technology and Entrepreneurship of Seokyeong University.

The event was part of the five-day Seoul International Aerospace & Defense Exhibition 2021, which kicked off on October 19.

A day earlier, the World Taekwondo Demonstration Team performed at the pre-opening ceremony of the ADEX 2021. A total of 440 companies from 28 countries, the largest ever, are participating in the five-day indoor and outdoor exhibition to introduce cutting-edge technologies. World Taekwondo is running a promotional booth during the Seoul ADEX 221 to sow the excellence of the sport to visitors.

Leuven University Prof. Emeritus Luc Reychler, former secretary general of the International Peace Research Association, attended the seminar online, in which he made a keynote speech.

The seminar featured two sessions: one on “Enactment of UN International Day of Peace and Future Peacekeeping Operations” and the other on “Future Armed Forces and Technological Advance for Peace.”

At the beginning of the seminar, GCS President Choue made his opening remarks, in which he said “What is the relationships between ADEX and taekwondo? Ironically, we are all here for peace and the promotion of self-defense. For me, peace is more precious than triumph. It is a motto, a way of living, that was passed down from my late father, Dr. Young Seek Choue to me.”

“My father was born in what is now North Korea. He experienced the Second World War, the Korean War and made himself into an educator, philanthropist, and peace-loving man. In the 1950s and 60s, he envisioned Korea to be a global leader in education and peace. For this reason, he created Kyung Hee University System to promote a holistic pathway to education, from pre-school to middle school all the way to college,” Dr. Choue said.

“In July 1981, as president of the International Association of University Presidents, my father proposed the establishment of the United Nations International Day of Peace. He believed that war and conflicts are part of humanity, but on this day, there should only be peace and respect for humankind. That same year in 1981, the 36th United Nations General Assembly accepted the proposal and that was the beginning of the UN International Day of Peace on every September 21. And this year, we celebrate the 40th anniversary of this meaningful day,” GCS President Choue said.

He continued to say, “I grew up learning from my father. I asked myself: what could I do to promote peace and create a civilized world through taekwondo? In 2008, I launched the Taekwondo Peace Corps. It was the first global peace movement through taekwondo. Over the past 10 years, we have sent more than 2,500 young coaches and volunteers to more than 120 countries to help youths in developing countries and in communities that needed help. It was also a movement to promote cross-cultural respect.”

In 2015, he said, I remembered watching the news about the European migrant crisistwo months before, when more than a million migrants and refugees crossed dangerous borders and seas into Europe. I was personally shocked and saddened by their plight.

“So I thought about it and on September 21 in 2015, 34 years after the UN accepted my father’s proposal and established the International Day of Peace, I announced at the UN headquarters in New York that I was going to launch the Taekwondo Humanitarian Foundation.” “Over the past six years, we have created projects in refugee camps in Jordan, Rwanda, Niger, Colombia, and Turkey. We hired coaches to teach taekwondo to refugee children, supported equipment, and also taught them about the values of peace and Olympism.”

GCS President Choue said, “I am very proud to share with you that as of today, we have 16 children who are now black belt holders in the Azraq refugee camp in Jordan alone. We also had four refugee athletes selected for the Olympic and Paralympic Games that took place in Tokyo recently.”

“Another aspect of our global peace movement is the engagement with North Korea, through the North Korean-led International Taekwon-Do Federation. We have organized joint demonstration performances over the past few years, especially at the PyeongChang 2018 Winter Olympic and Paralympic Winter Games and at the UN office in Geneva. We hope that such efforts will help the respective governments come together for a peaceful resolution on the Korean Peninsula and in East Asia,” he said.

Dr. Choue said, “Sport has a powerful role to play in addressing social issues and achieving global targets, through partnerships with events like ADEX. Through taekwondo, we promote values such as inclusiveness, respect, tolerance, courtesy, and integrity. On the mat, we are competitors but we play fair. Off the mat, we are friends.”

He concluded his remarks by saying “This is what peace is more precious than triumphis about. This is the motto that World Taekwondo and the Taekwondo Humanitarian Foundation are founded on. And this is what we hope that partnerships with ADEX can help to achieve: a peace-loving world.”