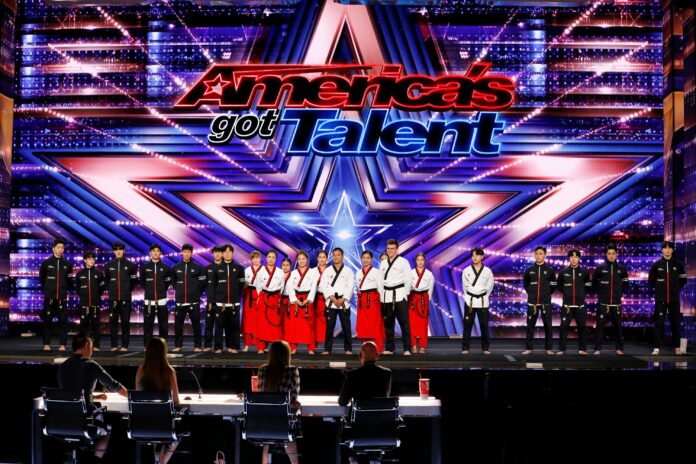 The 22-member team delivered a flawless three-minute audition, wowing the judges with their gravity-defying athleticism, acrobatics and Taekwondo kicking skill. Simon Cowell described it as “one of the most extraordinary things I’ve seen in all the years I’ve been on Americas Got Talent.”

Sofia Vergara called it “perfection” and Heidi Klum said “I had goosebumps. This was amazing.” “I have never seen anything like this in my life! The discipline that is involved, the message that you have – amazing,” added Howie Mandel.

The Demonstration Team performed under the theme of mental training and used their audition as an opportunity to send out a message for a more peaceful world.

Hollywood A-lister and America’s Got Talent host, Terry Crews, was so blown away by the performance he did not hesitate in pressing the Golden Buzzer. Crews said:

“I’ve got to tell you – I have never ever seen anything like this in my life! World Taekwondo. This is not about fighting, it’s about courage, it’s about confidence, and respect. And I respect what you guys did out here today like no one else. And, you know, you were not able to make it to the Olympics and get a Gold medal but I am going to give you something golden right now!”

As a result, the Demonstration Team will skip ahead to the quarterfinals which will be broadcast live at the beginning of August. They will hoping to make it through to the finals in September where a cash price of USD 1 million will await the winners.

America’s Got Talent is one of the most popular TV shows in the U.S and generates a global following. With its celebrity judges and amazing contestants, and is currently in its 16th season. The World Taekwondo Demonstration Team’s success in the show is an excellent opportunity to raise more awareness of Taekwondo and showcase the sport’s excitement.