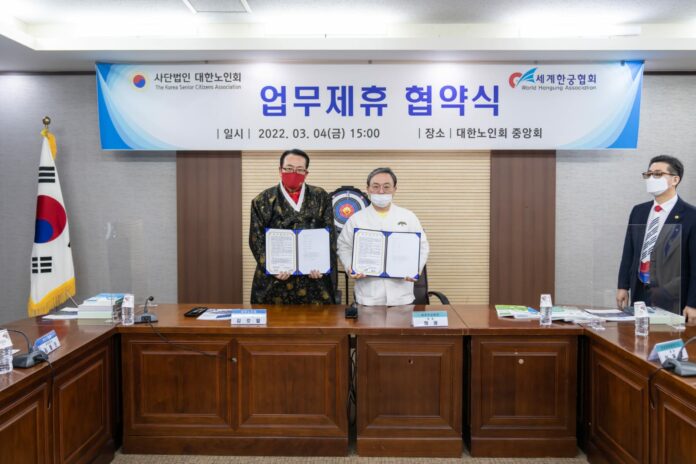 Under the accord, the two sides agreed to promote the health of senior citizens through Hangung, create jobs for the elderly through the use of the dementia prevention program, and organize a world hanging tournament for the elderly, among others.

Hangung, or hands archery, was invented by Korean Hu Kwang in 2006. Hangung is a sport for all, which combined the western dart game with traditional Korean archery and Tuho, or throwing sticks from a set distance into a canister, plus an electronic score board. Hangung is a record sport that throws Hangung pins five times with the left hand and the right hand, respectively and determined a player with a higher mark as the winner.

KSCA President Kim said in his remarks during the signing ceremony, “We are pleased to sign an MOU with the World Hangung Association, which would help improve the physical strength and concentration of the elderly.”

WHA President Hu said, “It is a great honor to ink an MOU with the KSCA after Hanging was officially approved as a recognized sport last year by both the Korean Sport & Olympic Committee (KSOC) and the Korea Paralympic committee. I believe that Hangung will play an important role in activating the tentatively named Korean Sport Association for the Elderly under the KSCA.”

Shortly after the signing ceremony, WHA President Hu received an appointment letter from KSCA President Kim as a member of the KSCA Policy Committee.

The KSCA was established in 1969 for the promotion of the rights and welfare of the elderly in Korea, with a nationwide membership of around 3 million.

The WHA was inaugurated in 2014 for the globalization of Hanging and the Hangung CHANGE movement. The WHA was registered an international member of the TAFISA (the Association for International Sport for All) in 2015. Under the WHA, there are the Korea Hanung Association, the Global Hangung Leaders Institute, and the Hangung Family-HELPS Education & Culture Promotion Institute, with a nationwide member of about 1.5 million. The WHA signed an MOU with GCS International, the Seoul-headquartered, UN-affiliated international NGO, in 2020 for the globalization of Hangung.