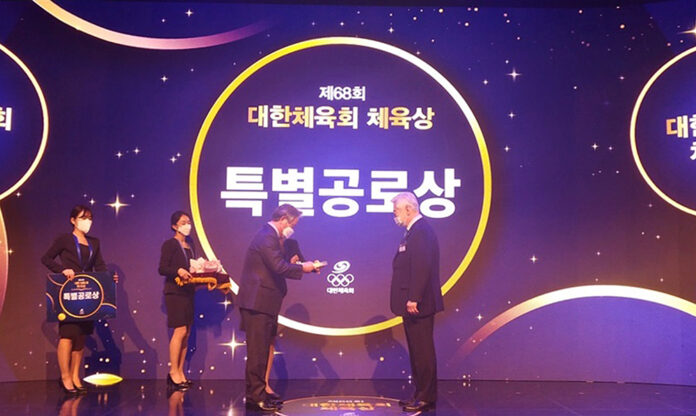 The KSOC honored the GCS founder with the special sport award in recognition of his life-long dedication to the promotion of Korean sports through education.

In the awarding ceremony of the 68th KSOC Sports Awards, which took place at the Olympic Park in Seoul, Dr. Chungwon Choue, president of World Taekwondo and GCS International, the eldest son of the late Dr. Young Seek Choue, received the special award from KSOC President Kee Heung Lee.

The late Choue, born in 1921 and passed away in 2012, established the country’s first physical education college at Kyung Hee University in 1951, producing more than 20,000 coaches and national athletes so far. He also established the world’s first taekwondo department at the four-year university in 1983.

The late Choue started the GCS (goodwill, cooperation, service) movement in mid-1970s together with world-renowned intellectuals, including university presidents. He set up GCS International in 1979 and played a crucial role in establishing the U.N. International Day of Peace in 1981. He dedicated most of his life to the promotion of world peace through education.

The KSOC created the Special Achievement Award, as part of its annual KSOC Sport Awards, in 2020 to honor and respect those who made a great contribution to the promotion of Korean sports. The first recipient of the Special Achievement Award was the late Cho Yang Ho, who served as president of the Korea Table Tennis Association. The second recipient was the late Lee Kun Hee, former chairman of Samsung Group and honorary member of the International Olympic Committee.