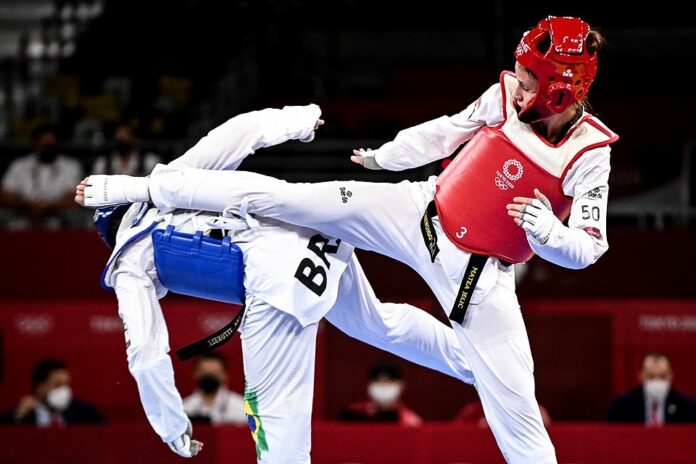 As WT decided to make it mandatory to wear the new competition uniform at the Tokyo Olympics last year, DAEDO launched their version of the new competition uniform for the Olympic athletes in 2021. Approximately half of the athletes participating in the 2020 Tokyo Olympics wore this uniform during the Games. The purpose of World Taekwondo (WT) was to improve the functionality of the uniform, making it more suitable for Taekwondo athletes to perform better and to help media exposure with a new design.

– The upper and lower arms (width) of the existing Taekwondo dobok are wide because Taekwondo doboks have used non-flexible fabrics so far, and the width of the top, especially pants, has naturally expanded to avoid interfering with the movement.

– This is even more so because body movements in Taekwondo games have changed a lot in the past decade compared to previous Taekwondo games since WT adopted an electronic scoring system at the 2012 London Olympics.

– Previous competition dobok would have been unfavorable to Taekwondo performance.

A new fabric developed by Daedo

Therefore, Daedo developed a new fabric that applied to a new uniform by adding elasticity to an ultra-light fabric weighing 190gsm and having good ventilation and drying.  In Taekwondo, uniform weight and ventilation are important factors for athletes and their performance. The real innovation is that Daedo puts holes in the fabric itself instead of using a mesh fabric to improve its ventilation. You can find these vents at the top of the mound, armpits, and the back of the knee of the pants.

Daedo also changed the design to improve the athletes’ movements as requested by WT but tried to respect the classic Taekwondo look by avoiding an overly tightly-fit design. This new uniform received, by far, the most positive feedback from the athletes and coaches, even from those teams who were not wearing the brand at the Olympic Games, highly praised for its lightness, breathability, original Taekwondo look, and the fabric itself.

Until now, the global scarcity of raw materials has affected its production. However, after a long wait, the new competition uniform (TA2020) is finally available on-demand, with an estimated delivery time of 2-3 weeks per order.