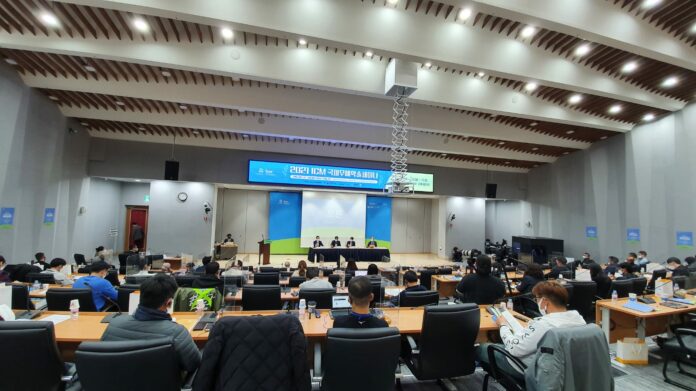 Under the topic “Exploring the Social Value of Martial Arts: Mutual Respect and Nonviolence,” the annual international seminar, the fourth of its kind, drew about 70 people due to the COVID-19 pandemic.

The seminar started with opening remarks by Park Chang-hyun, secretary general of the UNESCO ICM, followed by a keynote speech and two sessions and related panel discussions.

Prof. Kim Do-kyun, president of the Korean Alliance for Health, Physical Education, Recreation and Dance, delivered his keynote speech on the topic “The New Normal Era! Realizing and Sharing of Social Values through Martial Arts.”

Prof. Kim, who also serves as a board member of GCS International, said “Considering that martial arts are being recognized worldwide based on the physical activity, it is vital that policy support and development should be prepared in accordance with the new normal era and global sports environment by including martial arts in the area of sports. In conclusion, it is required to solidify its position as a leading country of martial arts by conducting the realization and sharing of the social values of this discipline in accordance with reality.”

Prof. Kim said in his presentation, “Martial arts are very ironical physical phenomena. This is because focusing on the physical aspect transforms martial arts into the most dangerous weapon and tool for violence, while focusing on the spiritual aspect can help it reach the absolute state of nonviolence. Perhaps this irony is why as one becomes a greater master, the person practices more on subduing body strength as much as one can. The nonviolent nature of martial arts may be the greatest gift the irony of martial arts gives to mankind.”

As the second speaker of the Session 2, Dr. Kang, who also serves as secretary general of GCS International, made his presentation on “Taekwondo and Social Responsibility: Case Studies of World Taekwondo’s Global Peace Movements.”

Dr. Kang gave a detailed presentation on World Taekwondo’s global peace initiatives, such as the establishment of the Taekwondo Peace Corps in 2008 and the launch of the Taekwondo Humanitarian Foundation in Lausanne, Switzerland in 2016 to empower the refugees worldwide, along with the WT Cares Program in 2016 to help the disadvantaged in developing countries. He mentioned that “With the financial support from the Asia Development Foundation, World Taekwondo is carrying out its Cares project in Nepal, Cambodia, Sri Lanka, Bhutan and to expand to East Timor, Kyrgyzstan and Mongolia shortly.”

He concluded by saying, “As Korea’s gift to the world, taekwondo is a blessed sport that serves for the benefit of all mankind, “Hongik Ingan” in Korean. Taekwondo is indeed a peace-loving, nonviolent martial art sport, which is greatly beloved by the world.” Established in 2016 under the agreement between the Korean government and the UNESCO, the International Centre of Martial Arts for Youth Development and Engagement under the auspices of UNESCO (Category 2) is the third UNESCO Category 2 center within Korea. The new ICM building was opened in 2020.