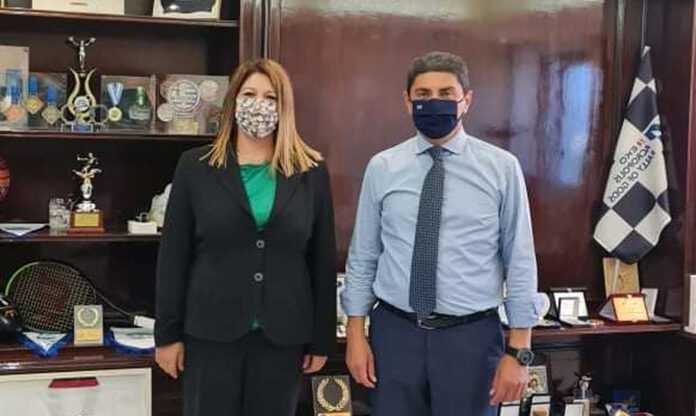 The Deputy Minister of Sports of Greece, Mr. Lefteris Avgenakis laid the foundations for the inclusion of Beach Taekwondo in the Mediterranean Coastal Games 2023, which will be hosted by Heraklion, Crete. The ETU Council Member, Mrs Effie Zikouli, presented to the Deputy Minister of Sports the importance to include Taekwondo to the official program of the Games last Tuesday.

“Taekwondo should stand out as a sport, in all its formats”, said Effie Zikouli who introduced under ETU and WT, the World Beach Championships in 2017 in Rhodes Island, Greece. “Beach Taekwondo is very spectacular and fun format. Athletes enjoy participating and TV ratings in SKAI TV in 2018 (it was almost 25%) proved that we have an amazing television product to explore”.

The Municipalities of Heraklion, Hersonissos and Malevizi will co-organize the Mediterranean Coastal Games 2023. The news was announced on October 14, by both the International Committee of the Mediterranean Games and Lefteris Avgenakis through their Twitter accounts.

The Deputy Minister of Sports stated: “The General Assembly unanimously welcomed our candidacy file & 3 coastal Municipalities (Heraklion, Hersonissos, Malevizi) will co-organize the Mediterranean Coastal Games 2023. Greece, Crete, Heraklion in the sports center.” “Next week we will start the official discussions with the International Committee of the Mediterranean Games”, added Effie Zikouli.

During the fruitful meeting with Mr Avgenakis, the possibility of organizing the European Beach Championships in Greece was also welcomed with enthusiasm.