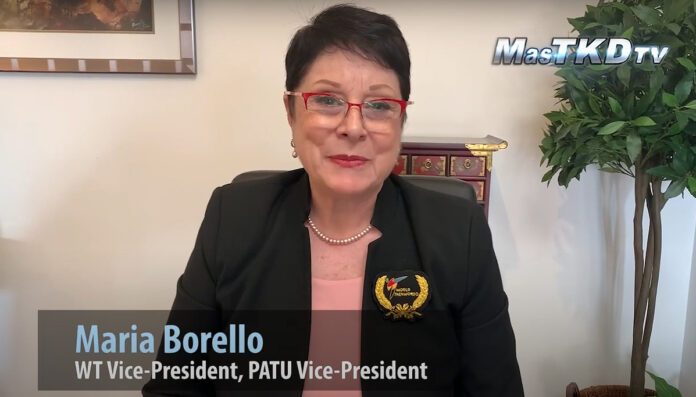 The remarkable thing about Borello, who has been part of the Executive Council of the World Taekwondo for more than 20 years, is not only the fact of reaching the vice-presidency of the two highest entities (continental and worldwide), but she assumes both positions for being the most voted among her peers, since she was running to revalidate her position as Council, but by getting the most votes, she automatically ascended to the vice-presidency.

The World Taekwondo elections confirmed Dr. Chungwon Choue as the leader of the governing body of our sport, having been the only candidate for the presidency, but the electoral contest was held to access the 17 seats available to occupy a chair on the Executive Council.

The election was conducted using the Lumi system, which has been reliably used by the IOC, ASOIF and many other International Federations over the last year and a half.

Maria Borello (79 votes) who represented the American continent during this worldwide election contest ran for PATU and along with her also Anthony Ferguson of Trinidad & Tobago (35 votes), Francisco Camacho of Dominican Republic (22 votes), Hung Ki Kim of Venezuela (44 votes), Kee Ha of Canada (45 votes) and Marilu De Veer of Aruba (34 votes), who did not reach the number of votes needed to access to the Council.

In a brief video exclusively for MASTKD, Maria Borello thanked the trust placed in her saying:

“I AM VERY GRATEFUL WITH GOD, DOCTOR CHOUE AND ALL MY COLLEAGUES. I PROMISE TO WORK EVEN HARDER FROM NOW ON.”