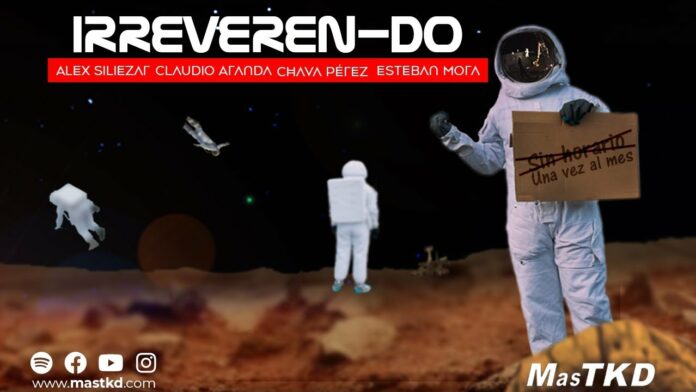 In this Irreveren-Do show, we talk about three issues:

Arrival of beings of other worlds

Weeks ago we informed that the World Taekwondo (WT) established a normalizing commission in WTPA to investigate the presente and past administration.

What we do not know is why WT made the decision and we will not know it, at least it seems that way, because the interim president Helder Navarro does not like to talk to the press – nor the MNA presidents.

Hands up, nobody move!

With the cancellation of Cali 2021 Pan American Youth Qualifier, the presidents and coaches were left with their hands up and without moving, because they still don’t know what to do.

As an extra piece of information,  we learned that the Dominican Republic planned to get out of the tournament organization because  they could not run the G1 with cadets and juniors, which affects the event profitability. However, Navarro never reported this and said that, following Pan Sports and WT guidelines, he proposed canceling the event. Same proposal voted unanimously in the Executive Council.

Ecuador presented another proposal; which must be polished, because Víctor Hugo Quishpe and his board of directors put on the table to grant the quota for Cali 2021 to the countries that had participation the Lima 2019 Pan American Games.

The breaking point of this possibility is that for Lima 2019, Taekwondo held 104 quotas in Kyorugi and for Cali only 64.

Thus, at Irreveren-Do we conclude that the system could be viable and one way to make it feasible is through results. Taking into account:  first, the podiums, then, performance in Lima 2019, the best fifth places and so on until the quotas are completed.

Likewise, we learned Navarro created an almost secret work commission, which supposedly will cook up the solution with a system that no one knows when will be released, at a time when urgency is pressing and time is crucial. Are they really working on something? Chava Pérez says no.

What are we paying for?

Our last discussion of the show was about the little participation Taekwondo has in the Pan American Youth Games Cali 2021.

Taekwondo is the contact sport with less quotas, just 64, far below other permanent non-Olympic sports such as Karate, which has 80.

And, if we compare it to contact sports in general, boxing, judo and wrestling knock it out. Since each one exceeds 100 quotas.

And, this is the question:  was Taekwondo a “fillling” sport? Did they give Taekwondo just leftovers? Was it due to political mismanagement? No idea. We have a president who has no opinion.

The truth is that silence in the WTPA (Helder Navarro and his board ), no answers to the MNA presidents and the delay resolution of organizational problems, are affecting the athletes in the area.

The national teams still do not know who, how many and in which categories they will present for Cali 2021. The presidents do not know what the commission created by Navarro is working on to provide solutions. The silence is sepulchral.

Let’s not forget that Cali 2021 is the first event which looks for  different results for the area in the Paris 2024 Olympic Games: however it seems that this does not matter to the authorities. Who will free Mesoamerica? In October, we will know.